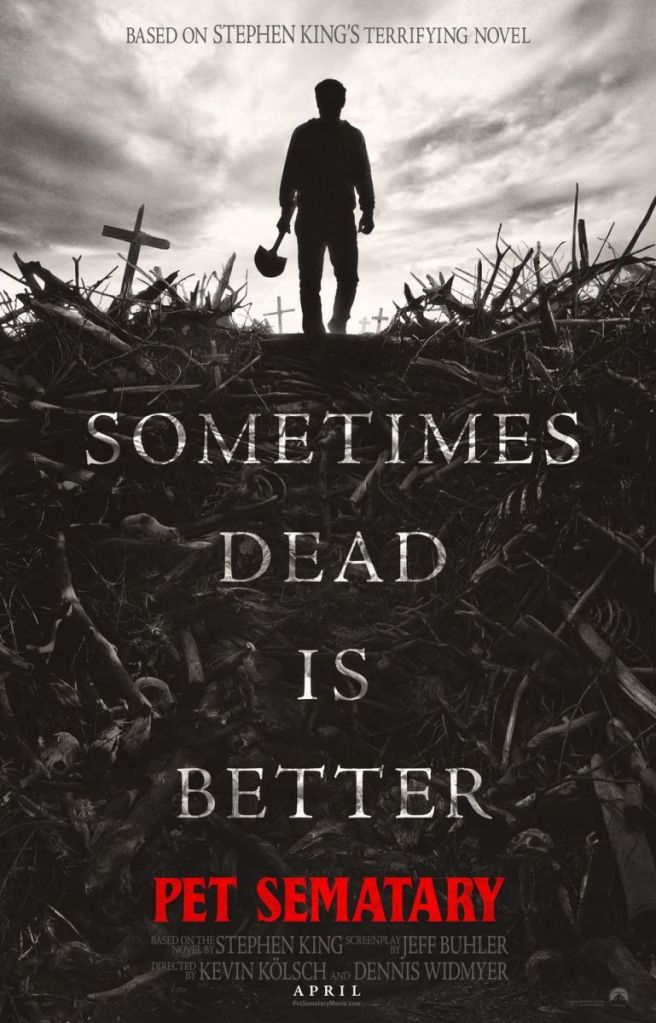 So I figured I would start this whole shebang with the REMAKES of Stephen King movies, because like Barney Stinson always says. . .

Worked for IT, so it MUST work for the others too, right?  RIGHT?!?

When I decided to do this, Pet Sematary and it’s remake were both ones I labeled AVOID AT ALL COSTS!  I didn’t want to deal with dead cats or babies.  Too much high octane nightmare fuel for me.

However, I decided that I should pull up my big boy diapers and watch them both.  I also ended up reading the book.

My thoughts on the book: Louis Creed DOUBLES F***ING DOWN!  When he brought the cat back, he had no idea what he was doing.  When he brought his kid back, he had the warning of the cat, the warning of the OTHER guy brought back, and the spirits telling him not to do it.  Then after he re-kills his murderous son, he then DOUBLES DOWN AGAIN and brings back his wife.  Dumbass.

So I started watching the remake, and within a half hour, I was already mad.  Instead of the cat dying while Ellie was away for Thanksgiving, it was killed during Halloween.  And Judd, for no reason at all decides to bring it back to life.  In the book he did it because Louis helped Judd’s wife when she was having a heart attack.  On top of all that, Louis tells Rachel that the cat is dead, so instead of “the soil in a man’s heart is hard” everyone knows that cat SHOULD be dead.

Then it turns out ALL the animals that come back, come back mean.  So, what the hell!  This becomes less fluke and more just feeding a bad machine.

Also, Louis is an asshole.  He drugs an old man and leaves him on the front lawn.  At least have the decency to drag him into the house.

This movie wasted John Lithgow.  He could have been an EXCELLENT Judd, but he gets very little screen time, and is given just a bad version of Judd.  Judd in the book tried to do the right thing and do things for the right reasons.  But in this he helps bring a cat back with noted evidence that it is a bad hand.

The big twist from the book and previous movie is that Gage gets saved, but Ellie gets hit by the truck.  Well, the Truck veers and the trailer ends up grinding to a halt with JUST enough force to kill a 9 year old girl on her birthday.  They even do it in slow motion which makes you think, “How does this have enough force to kill?”  But whatever, I don’t know the amount of force needed to kill a 9 year old girl, so I leave it to the experts.

She is brought back and actually waits a night before going on her killing spree.  That’s the difference between boys and girls, boys get straight to the killing, girls will give a nights sleep before going on the murder spree.

For some reason they decided to give Rachel a tortured psyche in this movie.  In the book she is haunted by the death of her sister, but this is Shining level torture.  She keeps seeing her dead sister pop up everywhere.  Results in probably the highest jump in my heartrate when she opens the medicine cabinet, to find a dumbwaiter chute and looking around sees her sister falling to her death, jump scare style.  Earned a swear from me.

So the climax of the movie has Dead Ellie kill her mother, drag her to the cursed graveyard and then decides to have the final showdown with Louis Creed.  She gets a few good shots in, but Louis gets the upper hand and just before he is about to go Shovel Knight on Dead Ellie, Dead Rachel pulls the back stab for critical damage.  Then they bury him and the Dead Family go get Gage who has died from being left in a hot car.  The end.

Now, there IS an alternate ending.  Instead of Dead Ellie burying Rachel, Louis catches up before she buries Rachel and the same fight goes down.  But when Louis is about to decapitate Ellie, he changes his mind and goes against his wife’s last wish and buries her exactly where she didn’t want to be buried.  Then Louis and Ellie go back home, get Gage and then wait for Dead Rachel to come home.  She does and there is just a very unnerving scene of them standing together and the camera slowly pulls away.

I would say the alternate ending is MUCH better than what they went with in the theatrical release.  Don’t think it fixes the movie, but definitely is better.

I would say if you want to like this movie, Don’t read the book.  It will make you mad. 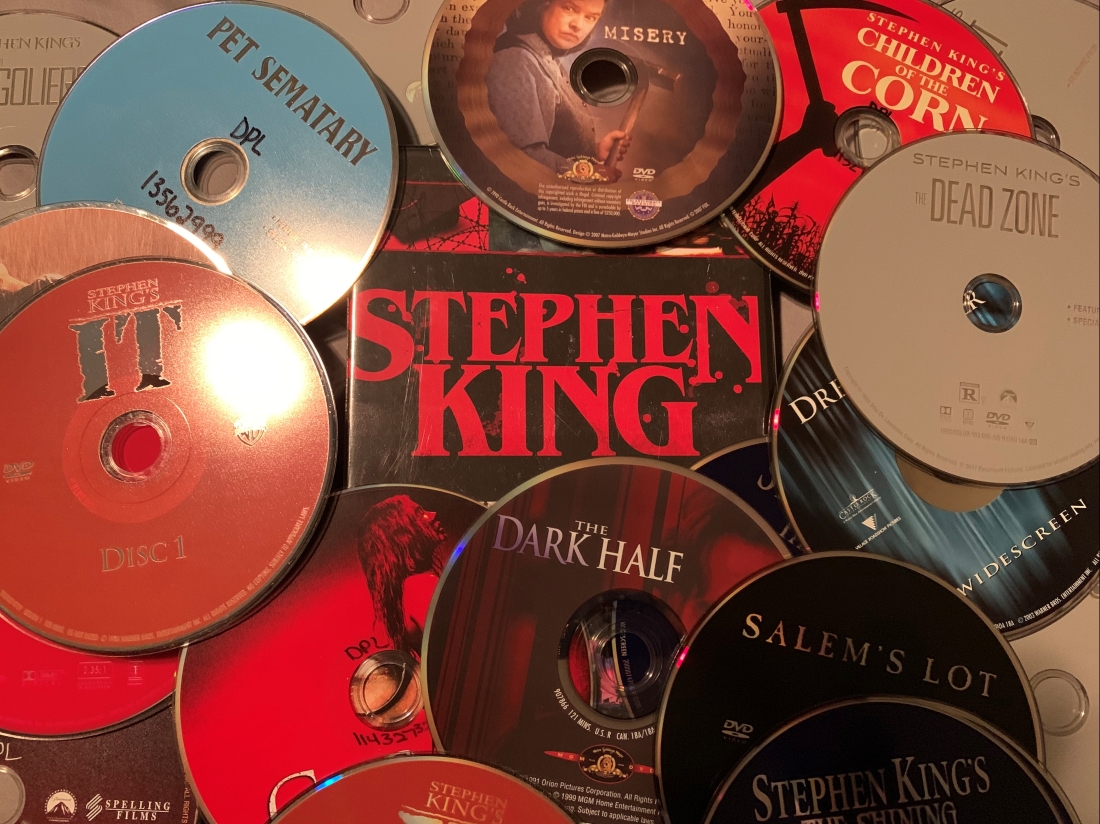 I am not a fan of horror.  I generally go for comedies, action movies, and when possible, action comedies.  I generally avoid horror movies because I don’t see the joy in getting scared and being bombarded by jump scares.  Also they tend to have bleak endings that don’t necessarily end with good triumphing over evil.  Usually the last survivor starts to ride into the sunset, only for the sunset to eat them.

As a result, I generally avoided the “Master of Horror” Stephen King.  He already had scared the crap out me and most other children of the 90’s with Tim Curry’s IT, so I wasn’t willing to subject myself to much more.

For the most part, I considered Stephen King the “default” answer that people gave when asked who is their favorite author.  Kind of like the Beatles are with music.  Just the mainstream common denominator.

However, 2 years ago we started getting trailers and information for the movie, “The Dark Tower.”  I had previously heard of the Dark Tower series before, but knowing it was “Stephen King” I knew it would be scary and depressing and I wouldn’t like it.  In fact, I was fairly convinced that the “Gunslinger” mentioned in the title of the first book would die in the first book and we would be following around the kid he encounters in the first book.

Last year I was in a bind to figure out what to do for a October marathon.  On October 1st, I was brainstorming and I came up with 2 ideas.  1. Watch as many Bad Horror/Halloween movies as I could find, 2. Watch as many Stephen King movies as I can.  Due to the release of The Legend of HallowHawaiian, I went with the bad movies.  And for that I was damned.

But I figured this would give me time to read a bunch of the books so I could compare them to the movies and write better reviews.

I have not managed to read all that many books, and in fact the books I HAVE read, I’ve already seen the movies, so no help there.

So like the years before, I have some rules.  These are all going to be movies I have NOT seen before.  So unfortunately none of these movies make the list:
The Dark Tower
The Dead Zone
The Green Mile
ANY of the IT movies
The Running Man
The Shining (1980)
Stand By Me
The Stand

What pisses me off most is that IT: Chapter 2 came out last month and Doctor Sleep comes out next month.  They would have been AWESOME to put on the list.