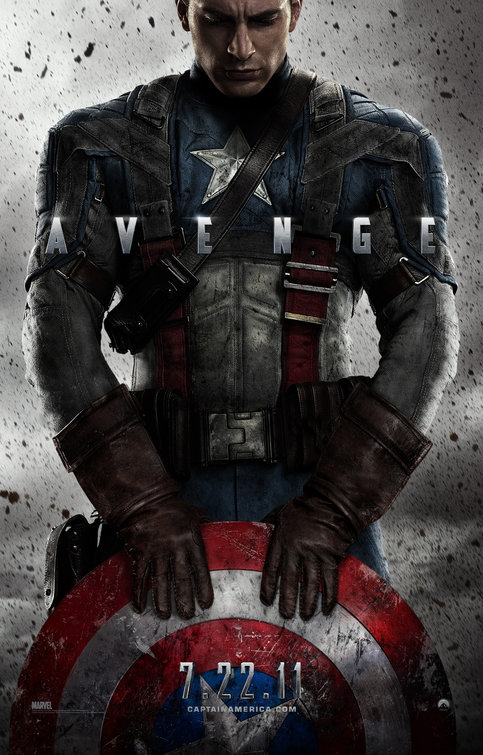 The Captain America movies are probably the most solid films in the MCU, outside of the Avengers films themselves.  Iron Man started the whole deal, Thor is the heaviest hitter, but Captain America is what routinely changes everything in the MCU.

When I first heard the details of Captain America, I wasn’t sure I was going to like it.  Chris Evans was the scrawny Human Torch.  And a period piece?  I want to keep things in the modern era, not worrying about what happened way back in World War II.  I want to keep the interconnected ball rolling.

Boy, was I glad to be wrong.  Chris Evans stole the show as Captain America.  And of course we can’t properly tell the story of Captain America without showing his WWII origins.

I love every part of this movie.  I even love the Red Skull’s car.  It drives into the film with little slits on the headlights, as if to say, “I am the evil villain car.  FEAR ME!”

I like that Steve Rogers routinely demonstrates WHY he was meant to be Captain America.  He earned it and even after he gains the powers and abilities from the Super Soldier Serum, he still demonstrates the ideals of his comic counterpart.  Also, his main goal is protecting people.  Take notes DC.  Your boy scout needs work.

So I just got to the scene where the Nazi leaders are in the Hydra base chastising Red Skull for invading Norway.  Then he casually activates his energy cannon and kills them all.  What strikes me as odd is the cannon activates and aims for the Nazi leadership, and they just keep talking as if nothing is happening.  I’m sorry, I don’t care how technologically advanced something is in, if it looks like something is turning and pointing at me, I’m going to assume it is a cannon of some kind and act like I’m about to be shot.

This also means I’m going to duck and cover when a super advanced species tries to take my picture.

I really enjoyed how they played off all the Captain America comics where Cap punches Hitler in the face, by making it a stage show.

The biggest moment of the film comes when Captain America saves all the soldiers 107th from Hydra.  We meet the Howling Commandos, who are such interesting characters in their own right.  I wish we got more of them in a TV series or something instead of just one episode here and there for Agent Carter.

Tommy Lee Jones is also a fantastic addition to this movie.  Best part is, he isn’t even doing all that much acting.  Tommy Lee Jones is just coming in and being Tommy Lee Jones.  And winning at it.  Best lines: “Cut off one head, 2 more will-“(shotgun blast) “Lets find 2 more.”  and “I’m not gonna kiss ya!”

The biggest loss of this being a period piece is that we can’t really get these actors in future films outside of flashback.

The final climactic scene between Captain America and Red Skull is still fun to watch, but it is largely just finishing off the film and story.  I think the rescue of the 107th is the real pinnacle of the film and the remainder is sort of a plateau.

What was nice of DC to do was re-release Captain America First Avenger retitled as Wonder Woman.  It stars Captain Steve(played by Chris) doing a self sacrifice play to help save the world while talking to the woman he loves but can’t be with because he needs to destroy a plane during a World War.

The one disappointment I have with the film is that it doesn’t have a proper after credits stinger.  What we get is a teaser for The Avengers.  At the time I loved it.  I figured it was going be several months before we saw ANYTHING on the Avengers.  However, we got a proper teaser IMMEDIATELY!  I still watch it every time, but it doesn’t inspire normal people to sit and watch it.  Primarily because they are willing to just cut off the end and go right into Avengers.