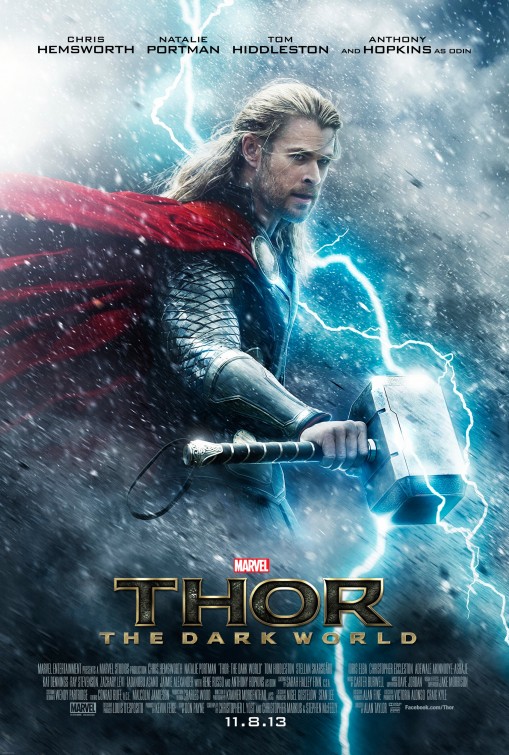 This movie more than any other on this list is going to require me to actually pay attention.  I think I’ve seen this movie about three times.  Once when it originally came out, once during the marathon for Age of Ultron, and probably one other time somewhere in there.

Like a good Marvel fanboy, I said I liked the movie, but had my problems with it.  The Villain was bland and boring, Odin was drastically different, and the plot was confusing.  But because it was Marvel it was good enough, right?

As time goes on, I think if I truly enjoyed it, I would have watched it more than just the few times I need to build my list.  But I guess that is what this marathon is for, isn’t it?

So going off what I remember not liking about it, the BIGGEST complaints I had were about Malekith and Odin.

Malekith is just boring.  He is just a grim dark villain seeking to destroy everything.  What’s worse is that Malekith in the comics was INSANE!  He was an entertaining villain in the realm of Loki and Green Goblin.  Sadly he was stripped bare for the movie.

Odin in Thor was a wise and good king.  He acted in the realms and Thor’s best interest.  He was the kind and wise father figure.  Yes he acted harshly towards Thor but it was because Thor was a bully.  It was to teach Thor a lesson about being TRULY worthy.

In this, Odin is unworthy.  He treats Jane Foster like a lesser being.  He is haughty, cruel, and dismissive.  Instead of trying to spare his people from war, he tries to draw war TO Asgard.  Odin also fully embraces Genocide of the Dark Elves where he sought peace with the Frost Giants.  Different threats maybe, but still, this Odin seems to be struck with madness.

I’m coming up on the third act and my opinion so far hasn’t changed on either of these characters.

One character that annoyed me the first time I watched The Dark World was Kat Dennings.  Every time she talked it just annoyed me.  This time around I actually enjoy her comedy a bit more.

Other than that, everything sort of stays the same.  Despite not liking the villain, I thought the jumping in between worlds gimmick in the climactic battle at the end was kind of fun.  Sure the Aether VS Lightning Hammer part was boring, but when it gets going falling through wormholes, it is just entertaining as hell.

So no, my mind hasn’t been changed.  I would say it is my least favorite Marvel movie, but it is not terrible.  I still enjoy it enough to recommend and force my Fiancé to watch it, but it probably won’t be getting any non-marathon play.

Next on the list is probably my favorite MCU movie of them all, Captain America: Winter Soldier.