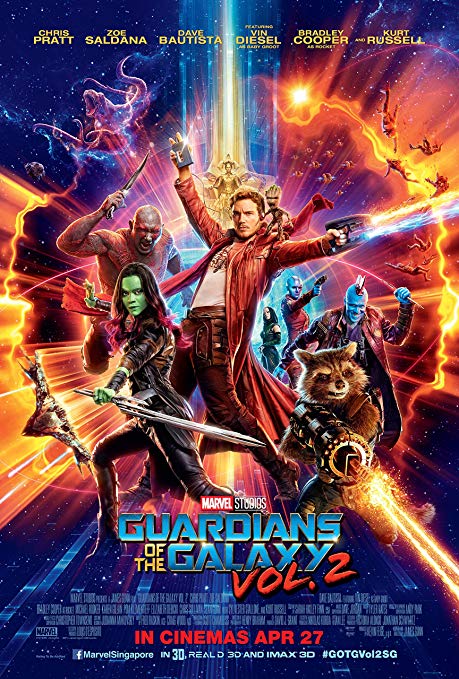 God these titles are getting long.

Making sequels are a deathtrap.  Hell, making good movies is a nightmare.  You can have everything going for you as far as script, cast, and willing audience goes, and still just not get that spark that makes your movie a success.  Getting everything right is miraculous.

Then you find you did your job too well and you have to go back again.  Part of what made the movie good in the first place was the growth of the character.  Well, if your character has already grown, then do you make them grow some more?  Do you try and regress so they can grow again?  Do you make them exagerations of the character they were at the end of the film?

In the original film, everyone brought their own brand of comedy to the film, but at the same time their own grief.  Well, they couldn’t quite maintain that balance this time.  Drax becomes largely a joke character.  Groot is a baby.  Rocket regressed to being absurdly arrogant.  Gamora is still the straightman.  Star Lord regresses similar to Rocket, but that is mainly due his world getting shaken up by meeting his father.

I like the story, but it is less about the team and more about Quill specifically.  They just have to deal with his problems.  Everyone had a stake in the last one.  This is Peter Quill Resolves his Daddy Issues: The Movie.

Yondu actually gets the most character development from the last movie without regressing him as a character.  Mainly because he was a side character.  Shame they killed him.

Spoilers, sorry. Damn, I’m getting bad at this.

Now this is all in the realm of “how does this compare to the original?”  I like this movie.  I really do.  But it doesn’t quite measure up to the original.  They have to make it bigger, better, and more absurd.  But this movie is hilarious.

I really like the story exploring Peter’s past.  Kurt Russell does a good job as Ego.  Ego is still just a one off villain that isn’t worth writing home about, but he’s fun for what he is.

One thing that this movie shows that people complain about in Infinity War is Peter’s actions.  When he found out Ego killed his mother, his reaction was to immediately draw and try and kill him.  So when Thanos admits to killing Gamora, he immediately tries to kill Thanos.

The climax is kind of long and drawn out and overly complicated, but when you are fighting a celestial that’s a planet, don’t expect a simple knock out punch.  At least they keep us laughing.

As far as stretching into the rest of the MCU, it really doesn’t cross over.  No stones this time.  Even though it apparently throws goo mountains on earth, no one mentions it ever again.

So a good movie over all, sadly not as good as the first one, but that is hard to do.

Oh, and I can’t WAIT for Adam Warlock! Hurry up and finish Suicide Squad 2 so we can get our freaking director back!

Next time, SPACE COMES TO US!  IN THE 90’S!  Yeah, this is a diversion from the order, but we have tickets for Captain Marvel tomorrow because the home watching option is not (legally) available.  And I probably won’t be able to cram in another movie between getting off work and getting to the movie.  But Captain Marvel really fits anywhere.