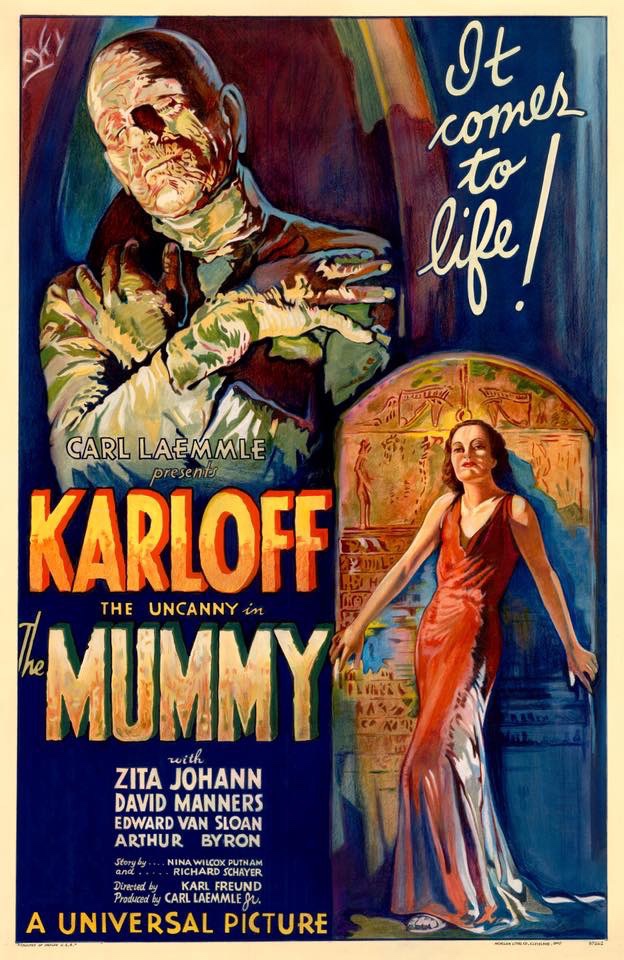 Before Brendan Fraser’s The Mummy (1999), I thought this was the least threatening and oddest of the classic monsters. It was only a slow moving zombie in bandages. So what? Even going into this film, I simply pictured it being something like the first Alien movie, where the suspense and story was being trapped in a tomb with the Mummy walking around picking people off, and some falling victim to the booby trapped tomb.

Nope. Fleshed out monster with goals, intent, and powers.

Unlike in Frankenstein where Boris Karloff switched back and forth between slow and lumbering and cat burglar-esque agility and speed, here Boris Karloff sticks to slow and methodical movements throughout. Where I thought the Mummy would spend most of the movie in bandages and lumbering around, he is only in bandages for one scene. You see him open his eyes, grab the scroll and then just see two bandages dragged out of the scene.

Here are some of my thoughts while watching the movie:

-ooo, an actual Model as the Title. How very Mystery Science Theater 3000.

-hey Van Helsing, shrugged off that murder by Frankenstein’s monster, I see.

-A CHEST MADE OUT OF GOLD? Damn, murder the other two, and become rich.

-(When Van Helsing Warns them NOT to open the chest)LISTEN TO VAN HELSING! HE KNOWS HIS SHIT!

-what was the point of explaining the scroll of Thoth in the title card if you were just going to have Van Helsing explain it himself almost word for word later?

-This is how the world ends, not with a bang, but with an idiot opening a box.

-Ardeth Bay? Gotta say, seems the Mummy has done well for himself getting back into things. Has his own secret identity, has figured out the modern era, and even has managed to keep his plans in motion for 10 years.

-I’m exposition man, vaguely gesture to a character, and I shall tell you their entire story.

-(When Helen suddenly leaves the party due to being possessed) At least this possession didn’t make you leave behind your coat. And also gets how public transportation works.

-Locked doors are too much though.

-Helen: “How did I get here?” Frank(with a BIG smile on his face)”My father and I brought you here! You Fainted!” STOP SMILING WHEN YOU SAY THAT!

-(When Frank is describing his feelings when he unwrapped the mummification of Anut Su Namoon) Wow, you fell in love with a dead chick. Neat.

-Frank: “There was something about her head.” That’s creepy. You’re creepy. Stop being creepy!

-Frank: “You really want to know why I didn’t take you to the Hospital?” Because they would have used a rape kit you CREEPY CREEPY BASTARD!

-When the Mummy is acting less creepy than the leading man, we got some problems.

-Van Helsing is not afraid to just call out monsters on their monstrosity.

-Mummy surveillance. and of course his cat.

-Can’t trick Van Helsing by burning newspaper instead of the scroll.

-And Helen, you are choking that dog as you drag it through the street.

-okay, yeah, Imhotep is officially catching up in the creepy contest.

-So is this The Mummy or Phantom of the Opera? Cause seriously what is up with this love triangle shit.

-HOLY SHIT! THE CAT DID KILL THE DOG! WHAT THE FUCK?!?

-Frank: Well, have this charm that kept me alive until now. And now I’m dead.

-Deus Ex Machina. I would credit the god that did, but I think that might be misconstrued. Let’s just say her name got borrowed by a not good group.

-And Helen is back, I think. Doesn’t matter story over.

I swear, there is never more than a minute or two between the monster getting vanquished and The End title card. I don’t know why Universal is trying so hard for a cinematic universe here when they had one back in the 30’s. If they didn’t insist on renaming Van Helsing every movie(and killing him in Frankenstein) they could have had him just coming into every movie and being the occult expert. It’s not like they change his role or accent very much.

Again, not very scary but an interesting story. Can’t say I’m a fan of Frank. He was only there to serve as a different love interest for Helen.

Tomorrow Night: From one wrapped up cinema classic to another.