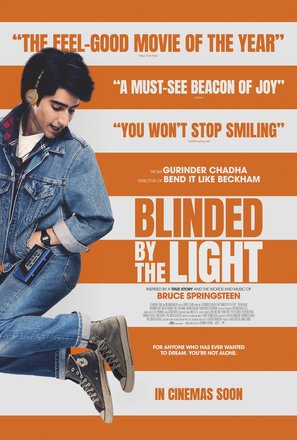 So I have been looking forward to this movie for a long time.  I keep referring to it as “The Bruce Springsteen Movie.”  To preface, I know next to nothing about Bruce Springsteen.  I did not even know his nickname was “The Boss” until I saw the trailer of the Customs Agent calling Bruce Springsteen’s hometown, “The Home of the Boss!”  I am aware of him, of course.  I love “Born in the USA” just like everybody else.  I even have my favorite Bruce Springsteen song, “Lucky Town.”  But that is about the extent of my Bruce Springsteen knowledge.  Fortunately, this movie is willing to expose people to “The Boss” through one of his most obsessive fans.

I absolutely love this movie.  It perfectly captures someone becoming completely obsessed with something and incorporating it into his worldview and everything he does.  I can also say if I was friends with the main character, I would HATE Bruce Springsteen.  Seriously, almost every other sentence out of this kid is “Bruce Says” or is speak-singing a line from one of Bruce Springsteen’s songs.  Which speaking as someone who tends to get obsessed with stuff, is not too far off.  When I was in high school, I discovered the joys of football and no one was spared the constant football metaphors.

And if you thought the US had a monopoly on Racism and hatred of immigrants, we learned it from watching our parent country.  Some of the Pakistani families have to have plastic over their interior door mat because apparently it is a regular occurrence for children to pee through their mail slot.  This is how people had to live!  Also a wedding parade gets ruined due to a white supremacy parade occurring right outside the Mosque it was going to be held in.

Although it is kind of built up as a “Springsteen Movie” it is really a story about growing up in England as a second generation Pakistani immigrant and finding a way to cope with your feelings through music.  One of the most visceral scenes in the movie is where Javed, the main character, begins listening to Bruce Springsteen for the first time.

If you haven’t just lost yourself in music that seems to perfectly echo your feelings, then this will be entirely lost on you.  But as someone who was a teenager with DEEP emotions and lots of bands willing to get rich off of pandering to these DEEP DEEP emotions of being an ugly lonely kid, I definitely felt this scene.  With my DEEP emotions.

One thing I didn’t really understand is why this movie was called Blinded By the Light.  Blinded by the Light only gets partially played once.  Yes, the speech at the VERY end of the movie references the song and explains why it was titled that, but I think “The Promised Land” would have been a MUCH better title.  It is the song that gets played SEVERAL times during the movie and is the song that has the deep emotional connection with Javed.  It also ties in a lot better with an immigrant family moving to England in order to get a better life and that life getting pulled out from under them by racism.

I enjoyed the hell out of this movie and I recommend most people need to see it, just for the historical perspective alone.  Especially how it seems to be echoing along today.

So two more movies left.  One with a Hint of things to come. . .