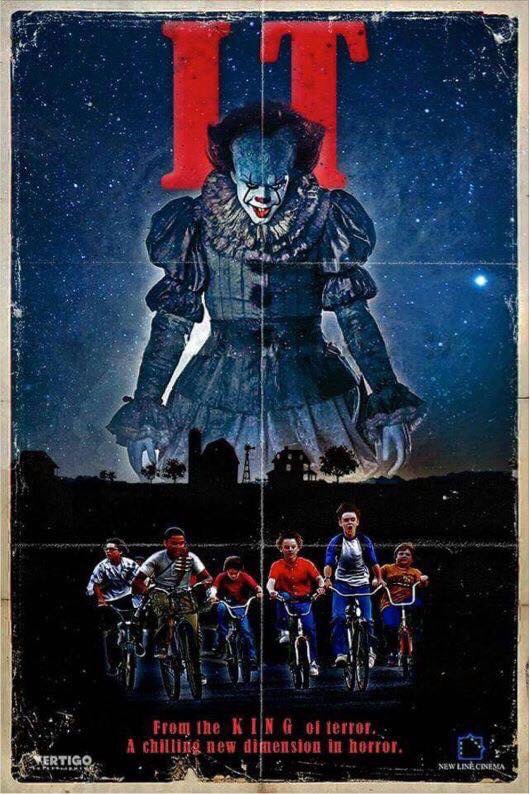 Whelp, back to being afraid of drains.

As someone who had the shit scared out of him from the original TV movie, I didn’t have any real intentions of seeing this movie with the Network Censors taking out of the equation. However after getting into the Dark Tower, and basically starting to reevaluate my stance on Stephen King in general, I was coming dangerously close to wanting to watch this movie.

Then people started talking about how great of a movie It was, I decided to give It a chance.

Before I start my review, I need to preface my history of IT.

I never sat down and watched the Original TV movie beginning to end. I just managed to catch several scenes of the movie as it was on tv when I was younger(probably while my dad was watching). If I did watch the whole thing, I don’t remember it well enough. I have watched the Nostalgia Critic review, which covers most of it, but it is watered down for humor. I tried reading the book once back in the late 90’s, but I didn’t make it very far because I am pretty sure I mentally psyched myself out.

So with all that in mind, I thought this movie was freaking great!

Acting all around was just phenomenal. Best child actors I’ve ever seen in film. They are witty and charismatic and have some of the best line deliveries ever.

I especially love the Badass Boast delivered by Mike from Stranger Things in the climax.

Sharing in the brilliant casting choices is Bill Skarsgard who plays Pennywise and does it amazingly.

Now, the biggest hinderance for me with most horror films is usually the jump scares. Can’t stand them. However, this movie pulls its punches.

With a few tweaks, this movie could have been unbearable. However, instead of jumping out at you, IT goes for creeping inevitably. The jump scares are telegraphed just enough that it is tolerable and makes it so I’m not looking away and keep my eyes riveted on each frame.

Except the projector scene. God damn Fuck that scene!

So yeah, great movie, I highly recommend it, not unbearably scary.

Now let’s see if I can sleep tonight.

Next Week: Kingsman: The Golden Circle