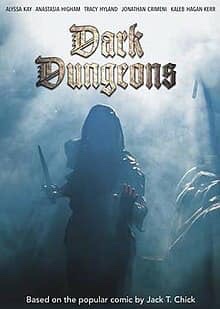 So, little backstory on this one. This movie is an adaptation of Jack Chick’s comic of the same name. Jack Chick is famous for publishing evangelical comics called Chick Tracts which preach against the evils of Islam, Catholicism, and D&D.

This movie takes place in a world where RPG players are the most popular kids in school and their magic spells actually work. Takes geek fantasy to a whole new level.

This movie is actually well done. The ridiculousness actually revolves around the subject matter. It is actually a faithful adaptation of the source material, which due to the insanity of the source material, makes it ridiculous. Hell, the rpg players get tricked into summoning Cthulhu. Then, after the main character’s friend commits suicide because her character died, so she prays to Jesus and God ends up casting out Cthulhu and blowing up the evil castle of evil with a lightning bolt. Then they burn a bunch of books.

I honestly recommend this one because it is really well done and fun watch.

Tomorrow: Well, I’ve run out of movies that subtly tie into each other, let’s draw from the hat again. . .