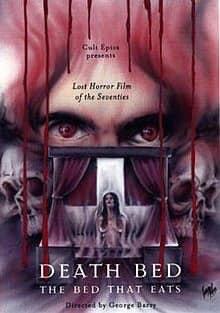 This movie was originally created in 1972, didn’t get a print made until 1977, and then did not get released until 2010. So somebody tried their best to bury this without going full on Atari ET, but somebody yanked this from the fire and released it on DVD.

This is why it is totally believable that people will hear a murderer in their house, and despite all the warnings, will walk right up to them. Or you know, not run away from a murderous bed.

The painting generally talks about the bed and at time mocks it. So a young couple come to the house that the bed is near, so to prevent the couple from going in the house, the bed locks the doors. The couple then goes to the cellar that the bed is in and decide to have sex on the bed. The bed then eats the couple. Now, instead of doing something cool like sucking them into the bed in a geyser of blood, such as Johnny Depp’s death Nightmare on Elm street, or spouting teeth and chomping down, it apparently is a water bed and they just sink down and dissolve in yellow water and foam.

So the bed resents that he didn’t move into the city and ends up having a fantasy about being a bed in the big city. The Daily Bugle then takes a break between calling Spider-man a menace to comment on all the thousands of people who mysteriously go missing. The bed then goes on a temper tantrum and starts putting cracks in the house walls. The painting mocks him and points out he could just destroy the house altogether. One cut later and the house apparently no longer exists, the only part left being the detached cellar with the bed.

Anywho, the next three idiots show up trying to find the missing house and decide to stay the night in the cellar. One of the girls, Sharon, apparently causes the bed great pain. The painting starts thinking about all the various victims in the past and we get a pretty hilarious sequence of people randomly being killed in the bed. Most of them just lying in bed reading or playing cards and then suddenly go “oh no, the bed is eating me. . .this sucks.” One set of gangsters actually decide to pull their guns and shoot into the mattress. Well, I say shoot, they just shake their guns, and their are gunshot sounds, but no trigger pulling or indication that the guns are doing anything.

The painting then remembers the victim that created the death bed. Apparently a demon lived in a tree(Death Tree?) then decided to become the breeze(. . .Death Breeze?), and because he found a woman he fancied he created a bed and then became human to seduce the young lass. Apparently her body was not ready and she died. The demon was sad and ended up crying bloody tears onto the bed and Death Bed was born!

Apparently the reason Sharon caused the bed pain was because her eyes looked similar to the woman the demon fell in love with. Having worked this out, the bed is now over it and can kill her now.

One of the girls decides to sleep while the other two girls search for the missing house. While she is changing into her nightgown, the bed makes bubbling moaning sounds. Then it eats her. Her friends spend about 2 minutes wondering where she went and then don’t care.

The bed then starts to eat Sharon’s other friend, but she manages to get off the bed and spends a solid 3 minutes dragging herself to the door, up the stairs and just before she gets outside, the bed whips out one of its bed curtains, grabs her and drags her back into bed. Sharon arrives just in time to get blood on her hands and show no emotion over her friend dying.

Sharon’s brother(literally his name in the credits) shows up, tries to stan the bed, and gets his hands dissolved to the bone. Again, he shows no emotion to losing his hands.

The demon who lives in the tree apparently falls asleep and the bed loses its powers. The painting is now able to talk to Sharon, and he tells Sharon how to perform a ritual to destroy the bed. The painting lied to Sharon and the ritual teleports the bed outside and sacrifices Sharon to summon the demons woman back to life. She then has sex with Sharon’s handless brother and the bed suddenly catches on fire(🎶This Bed is On Fire, with Passionate Love🎶) and the movie comes to an end.

This movie spends a lot of time with inner monologues explaining everything, but because everyone is so dull and monotonous, you probably lose track of what is going on, and everything is so stupidly complex. There are a bunch of hilarious scenes but a youtube clip show will give you most of them. Sadly there is no overacting to save this film.

Tomorrow: Sadly, this movie denied us Death Tree, but by damn we will HAVE OUR MURDEROUS PLANTS!