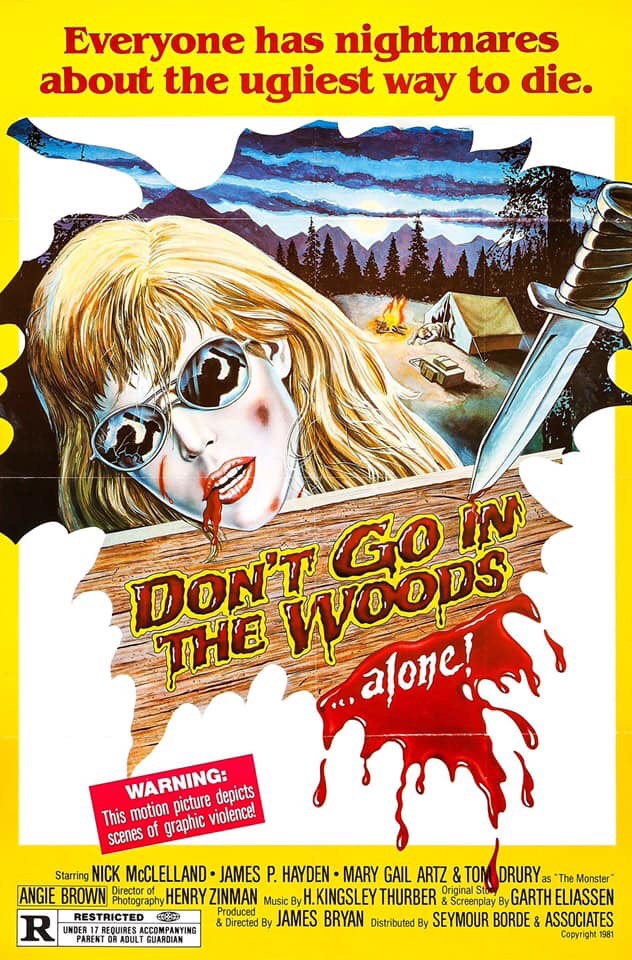 Tonight: Don’t Go in the Woods

So this is the most basic of basic slasher flicks. People go into the woods and suddenly start getting killed. There’s no real timeline for the film, but these are very crowded woods apparently because random forest goers get killed every 5 minutes or so.

We mainly follow four characters, Peter, Craig, Joanne, and Ingrid. Craig is actually prepared and knows about survival in the woods. Naturally he dies first. Peter is just here to party and is tired of all this walking around. Ingrid and Joanne are the names of the two women.

While our main characters are just walking around the woods, people are dying all around them. The film opens with one woman running for her life, then cuts to a man bird watching. The man then gets hit in the face by something. Then his arm gets cut off by . . . something. And he is then presumed dead. Later we meet DALE and his wife, who keeps shouting his name. DALE goes on ahead and DALE’s wife keeps calling for him. We then see DALE getting choked by his Camera strap, before we see DALE’s corpse dashed at the bottom of a cliff. We then see DALE’s wife dragged off screen bleeding.

Our main characters continue splashing around in the water, completely oblivious to DALE’s corpse being about 20 feet away. We then meet DICK and his romantic partner, who keeps shouting his name. DICK is trying to get things going in his VW van, but his lady of the evening sees something outside and before DICK can get anything going, he has to go settle whatever is going on out there. DICK goes out into the woods with his gun and DICK’s lady stays in the can. DICK next shows up bleeding heavily has he is thrown against the van window. Then something shoves the van, DICK, and DICK’s lady over a cliff. More people get killed as the movie goes along by getting impaled on an easel, killed with a falling bear trap, and even decapitated after while just sitting in a wheel chair.

At about halfway through the film, the killer finally gets around to the main characters and is revealed to be some crazy mountain man with a weird string noose looking thing tied across his face. He kills Craig, and the others all run for their life. Peter finds a stick and ends up killing another camper because he mistakes him for the mountain man. Peter and Ingrid manage to make it back to town but have left Joanne to die. Joanne finds the mountain man’s cabin and then the mountain man comes home and cuts her a dozen times with his machete before she finally dies.

This film was shot on mostly shaky cam, it was difficult to see what was happening a lot of the time because it was just crappy video quality. The audio was almost all dubbed over, and the version we watched apparently was missing the soundtrack. Though according to Cinema Snob, the soundtrack does not improve things, and at times, covers up the actual dialogue.

So yeah, bad movie all around.

Tomorrow: so why shouldn’t we go into the woods? Because they’re EVIL!