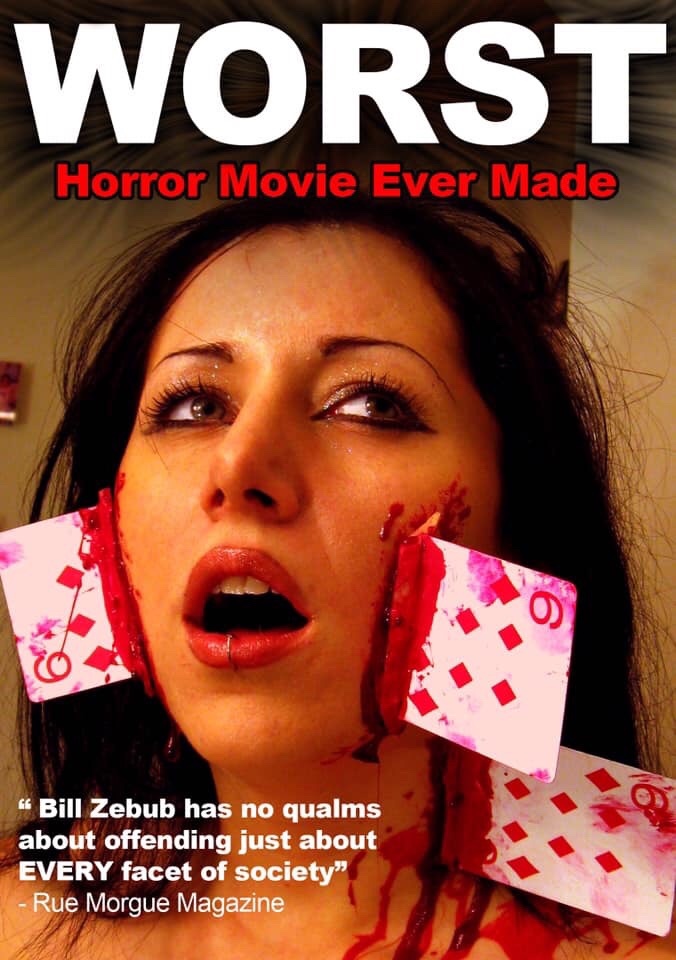 Tonight: The Worst Horror Movie Ever Made

When I started trying to find a bunch of bad movies, this showed up on a list. I figured, OBVIOUSLY this had to be one of the ones I reviewed. Only problem was I couldn’t find it. Couldn’t find it streaming, couldn’t rent or buy it digitally, and couldn’t find it at Movie Trading Company.

So I found it on DVD on ebay, and ordered it. Set to arrive on October 30th. It actually arrived 3 days ago, but eh, its funnier to say it was a well timed arrival.

All of the other reviews I typed up after finishing the movie. This time I paused the movie 5 minutes in, and started typing everything out as it happened because lord knows I would NOT be able to keep track of all the shit(and shit monsters) that happens in this movie after it happened.

Mind you, five minutes have passed from the start of the movie until now. The only other guy at the poker game decides to go to the bathroom, and the axe murderer convinces him to put on a blindfold, then cuts off his hand. Then the axe murderer proceeds to rape him.

A third woman shows up and quickly loses her shirt in strip poker, so everyone decides to quit playing. The guy decides to play 52 pick up, and when he flicks the cards in the air, 3 6 of diamonds(with incorrect number of diamonds) hit her in the face and neck, killing her. So the couple run away to live a life as fugitives, unaware of the number of bodies currently in the house.

A detective shows up ands is determined to track the couple down.

He does a really good job. They couple stop to use the bathroom and the woman goes in and encounters a poop monster. The man is found by the detective and told to drop his pants for a “strip search.” A nearby woman sees the man’s ass and the “sight of a full moon!” turns her face into a were wolf and she attacks the detective. The man takes the handcuff keys and runs away(despite not being handcuffed).

We are 15 minutes in. We still have an hour and a half left. Oh dear lord in heaven.

Then we cut back to the wolf girl and the detective and she is banging him from behind. The couple return to their car and resume their life on the run, apparently ignoring the rape going on right behind their car before driving away.

They run into soldiers who tell them they can’t go any further due to the city being quarantined. They convince the soldiers to search them so they can clear them to go through. The soldiers strip search them, and start raping the guy, and are about to rape the girl, but apparently she has poop on her. . . area, and they all start throwing up. One weird jump cut later, the couple is dressed and in the middle of the woods.

The couple then go to a fortune teller. I’m sorry, MisFortune Teller. The misfortune teller gives her a vial of liquid that is supposed to be “birth control”(due to an argument about having children) and tells her not to drink it until at least 1 mile away. She then buys a drink that looks identical to the vial and while looking at them both in her hands, forgets which is which and presumably drinks the wrong one. She then grows to the size of a building and all her clothes tear off. Because OF COURSE THEY DO!

AND GUESS WHO SHOWS UP!

The man goes to a bar, orders a drink and is given a red vial of liquid. Jesus follows him in and gets into an argument about whether this is his second or third coming.

The terrorists who are running the bar, then knock out and strap Jesus to a cross.

We keep cutting back to the 50,000 foot naked woman. Jesus then reaches out to the naked woman. . .with his dick. Until it goes soft due to blood loss. Jesus then decides to fly, while still attached to the cross. Meanwhile the nearby soldiers decide to fire a missile from a tank at the giant woman and end up hitting flying crucified Jesus instead.

The boyfriend convinces the soldiers to launch him into her vagina so he can stop the growth hormone and stop her from growing. While in there, he notices a cgi baby. He uses a laser gun to destroy the cgi baby.

She shrinks back to normal size and gives birth to her boyfriend(off screen). They jump cut to a green screen cave where they can hear. . . the Underground Rail Road? Yeah, they run into the ghost of a runaway slave. And the poop monster again.

Along with random images of a run over squirrel. Why?

While we were watching that, the ghost of the runaway slave defeated the poop monster. And the girlfriend still has no clothes on.

They are then teleported inside of a house and the girlfriend is now in lingerie from the strip poker game. They explain it, but It’s stupid.

The house they are in has a dead naked woman. . . and several dead baby dolls. They try and sneak out and find the sleeping murderer. Then the man goes to find a weapon and the woman gets captured. The man comes back with (sigh) baby-chucks, but drops them and gets knocked out.

The doctor/murderer then decides to induce labor on the girlfriend and pulls out the baby that was destroyed with the laser earlier. Apparently the baby isn’t dead, just burned. It knocks over a bottle with a bug inside and the bugs kills the doctor.

The boyfriend was apparently not tied up, only convinced to sit still so he wouldn’t be killed. The boyfriend then kills the baby as an act of mercy. Or that’s what he is shouting/singing while he jumps up and down on it.

The couple then escape into the woods. It is revealed that there is a reward for them, and a bunch of rednecks try to capture them for the reward. They try to get the boyfriend drunk, and the redneck girl tries to trick the girlfriend into getting killed by bats.

The girlfriend then cuts the face off the redneck girl and puts it on as a disguise. While she is doing that, the Rednecks rape the boyfriend.

She uses the disguise to walk off with her boyfriend, and then they have sex while wearing redneck girl’s face. Then she takes it off and they run away. Before the boyfriend stumbles into a giant Spider-web. A giant rubber spider shows up. The girlfriend remembers the trick to summon bats, and cuts the boyfriend free while the spider and bat fight.

Then a mummy shows up. And the boyfriend remembers he left the laser gun in his girlfriend’s vagina.

They shoot the mummy only to find out it was a man warning them they were about to trespass into zombie territory.

Oh wait, my mistake. Zom-BEES! Which are cgi flies with skulls on them. The girlfriend runs into a swarm of zom-Bees and tricks them into running into the spider web.

The boyfriend meets a naked lesbian choking on a candy. She then reminisces about a ventriloquist dummy that kills her girlfriend earlier that day.

Lets just leave it at the segment, like ALL THE SEGMENTS, goes on for far too long. She escaped by beating the dummy like a piñata, and then when candy fell out, she started choking on a piece.

Jesus finds the girlfriend and has sex with her, then a tree monster attacks Jesus and rapes him.

The boyfriend apparently is tripping out, probably from the moonshine, and he believes a woman walking her dog is Cerberus.

The girlfriend uses her vagina telepathy to track down her boyfriend who has been committed to an insane asylum. Which looks like a bar.

20 minutes left. THE END IS IN SIGHT!

They escape the insane asylum, using boobs and a crazy person. Then they break up because the girlfriend took a bunch of monopoly money thinking it was real money.

The girlfriend goes into the woods then runs into zombie Jesus. The boyfriend picks up a female hitchhiker and a female vampire.

The girlfriend defeats Zombie-Jesus with the vial of red liquid from earlier(I don’t know why or how that works).

The Boyfriend tries to defeat the vampire lady with a crucifix but it doesn’t work. After he pulls out his penis and they laugh at him, he eventually just leaves and they don’t stop him.

The girlfriend goes home thinking she has no reason to run, but the detective shows up and tries to rape her. Then the axe murderer kills the detective. Then rapes the body.

The boyfriend comes home, uncuffs the girlfriend and they reconcile, just before the police show up and kill the axe murderer. The police officer explains all the evidence clears them of all the murders.

The couple then decides to have sex and the girlfriend decides to do her boyfriend from behind with a banana. The banana is apparently a horrible creature that starts killing the boyfriend. Then one of the terrorists from earlier shows up and blows himself up, killing the girlfriend. It cuts to a map of the US and shows explosions happening everywhere.

This movie is basically just here to shock and offend. This isn’t entertaining or even “so bad it is good” territory, it’s just an hour and 48 minutes of naked women, batshit explanations, and moments where you have to stop and process what the fuck just crossed your tv screen.

I do not recommend this movie. Just forget it exists and move on with your life.

If you want to borrow it, let me know.

(JOIN US THIS DECEMBER FOR THE WORST CHRISTMAS movies EVER!)